admin, Author at Chess ATC - Page 6 of 7
Skip to content

Iranian President Hassan Rouhani visits Hyderabad and offered prayers at 17th Century Mosque – the pride of Hyderabad – Makkah Masjid. While Iranian President is spreading the message of love and affection in Hyderabad, Indian-origin Irish kids Tarun and Trisha are spreading the message of sportsman spirit in Iran. It is more than a mere coincidence. Its about strengthening centuries-old ties between India and Iran.

There are many common features between India and Iran. We picked up few words which match to Indian  words, like Namak (salt). Ustaad (coach), shakar (sugar) many more like these. In chess if you ask for a draw you have to say Mosavi. Salaam for Hello, Qubi for how are you. Ek, do theen, more or less pronounced in Hindi numbering. Persian language is one of the oldest language, very much popular in middle east. The young generation speak very good english, in the next 5 years, english speaking foreigners may not have any difficulty in communication. At present, if you don’t know Farsi, you need to be a champion in Damsharas (sign language).

The federation building is huge. It consists of tournament halls, where three fide rating tournaments can be conducted on a single day.

Parents of the chess players come to us and talk in detail about preparation for chess and also exchange the culture of the two nations.

Finally, the main person who is helping two countries to exchange the bilateral relations is none other then Arman Aryanejad. A young dynamic executive director of this circuit.

ATC feels proud to have such a highly experienced player like Perumallu. Last week ATC session is quite interesting. We have strong player like Kavi Samrat on board. Players like Suresh Duvvala (nakamura of ATC), played some good chess at ATC this week but unable to retain his previous week title.

It is very hard for kids to spare their time during February and March due to exams. It is hard to spare time for chess, if a student is good at academics. Our star players of ATC looks like they will skip this year exams as they are on nomadic journey of playing chess tournaments.

On a lighter moment, please watch below video on how a full time chess player struggle to learn telugu poems.

ATC founder made is maiden draw at Iran against a 1400 rated player. This is a true example, of how ATC can help to improve chess skills. ATC founder gives credit to Mr. Rammohan Rao (MRMR) for helping him prepare by playing at ATC.  All the chess players of Hyderabad should make the most from ATC, you can’t get players like Perumalu, Duvvala Suresh etc., for a mere cost of Rs 3 a match (if u take pass). If you are looking for cheaper then this cost, then we recommend GM Practice Group.

Under 14 Nationals are prestigious tournament in any part of the world.(In India it is followed for under 13 nationals). Trisha made a U turn at Ahwaz, Iran. She is now playing in category C, which is for under 14yrs. She wants to focus on building under 13 players in ATC. In this process she want to set an example by winning the championship at one of the strongest tournament in Iran.


The tournament is being played at Ahwaz, Iran. This is located at south part of Iran. The hotel we are residing at Neyshekar Hotel. It is a very good hotel. The venue of the tournament is in the same hotel. The food is delicious, but for vegans has very limited options, but for non veg lovers, it is unbelievable variety. The speciailty of Iran food is Kebabs.

ATC players thank GM practice group on whatsapp which provided an opportunity to practice while we are in Iran. It is a nice platform, where we get an opportunity to play with senior players at absolutely zero cost. We thank Mr. Rajashekar Reddy garu for developing this concept. Hope we see more senior players come in and share their chess skills. The ATC ideology of learning chess at zero cost meets our expectations, by playing at GM practice group.

We thank irish chess players for continous support. We specially thank Ireland chess union for their encouragement. Iran tournaments will help us to play a good chess at European Individual Championships at Batumi, Georgia.

We thank Arman tournament Executive Director (We call him Arman Jhohar) for bringing us to play in Persian region.

It is very interesting to watch this match. In the past Trisha made a win and a draw against Jishitha. WFM Jishitha yet to make a win on Trisha. The Ireland under 12 topper Trisha playing for ICU for the first time both played for AICF earlier. Trisha started her chess at Superkidschess whereas Jishitha took most part of her coaching at Mr. Ramaraju, a reputed coach of Telangana.

We have high regards for the two coaches

2. AGM Tarun who is a coach for Irish topper (under 12) Trisha

WFM Jishitha has high chances of winning because of her recent performance at the world level. Jishitha has a reputed coach on her side. AGM Tarun who is co-founder of ATC played few practice matches with Trisha and he hope he posed high difficulties to Trisha in the practice matches and he believes Trisha can out perform Jishitha.

Best of Luck to both players and may the Best player wins. 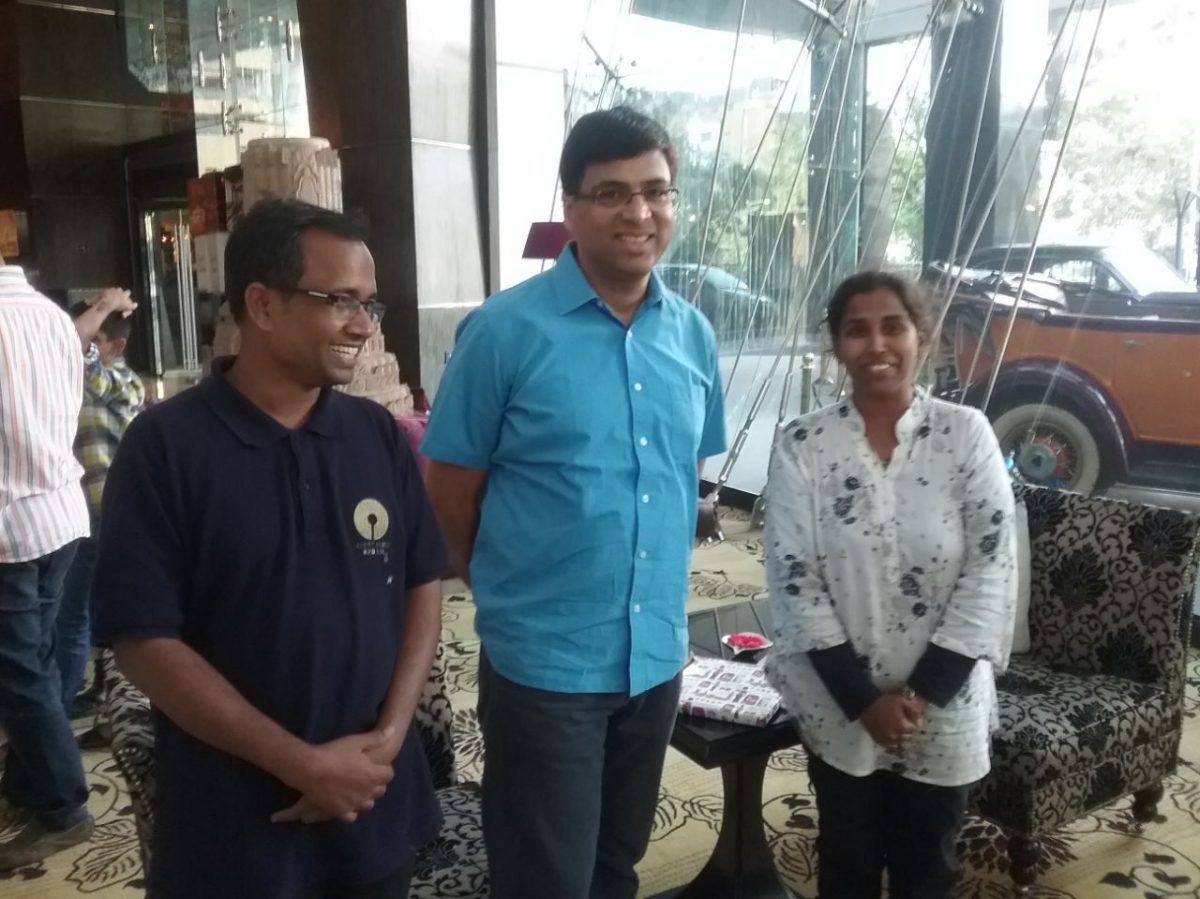 It was around 4 pm in Mumbai. My Mom and Dad were accompanying me (Tarun) and my sister (Trisha). We are the other two co-founders of ATC. We were playing the last round in IIFL Wealth 3rd Mumbai Open International Chess Tournament.  I secured 6th rank and Trisha topper in under 2000 category. This is one of the richest tournament of the world. We were representing Ireland.

While we were battling out the last round, the other two co-founders of ATC (my Mom Nandita and Dad Dayanand) cherished a memorable moment of our lives – that is to spend about 10 minutes with Vishy – India’s first Grand Master.

These photos were taken in Sofitel Mumbai when they met Grand Master Vishy Anand for about 10 minutes. They discussed about ATC and the unique model that are running to ensure every chess player has equal opportunity to learn chess by practice. Anand was impressed and wished us all the best.

No doubt, we are jealous. We are happy too. But more than all, we are proud to be from ATC. My dad and mom spoke about ATC with Vishy. They have also asked the Grand Master to visit us in Ireland, for which he said he may surely consider if we invite him.

True Champions like Vishy Anand are legends who has the will power to fight back any time in their lives. Even at this age, Vishy has just crushed Magnus Carlsen recently and created buzzing news around the world.

We wish all ATC players to get inspired by the personality of Vishy Anand and master his skills and take chess to newer heights.

More than winning 6th Prize, I was delighted when my mom showed me the Autograph of Vishy Anand taken on our tablet. This is the prize winning autograph: 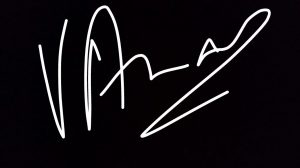 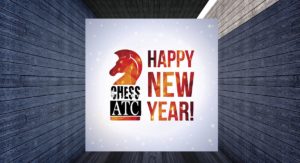 Any Time Chess (ATC) both the branches will be closed for one week due to Christmas. It is closed from 25th December till New year eve. We wish all the ATC chess players a Happy Christmas and New Year. We hope ATC provided you a great  platform  to experience and practice chess for the past year. 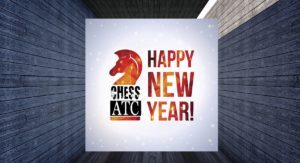 ATC introduced Free Blitz for power players, Classic match experience by experts for the players who are building their career in chess and on entertainment aspect we brought in ATC ka KBC which created lots of fun on the social media. We opened our new branch at Hi-tech city to provide ATC services to Cyberabad catchment area.

Our main aim is to provide facility to learn chess at affordable cost and make chess players to believe in themselves. Our experts guide the chess players to build their career and constantly in touch with the parents and the players.

ATC wishes to extend its services to other parts of India, as most of the parents and chess players of other states appreciated ATC services and its model. ATC is trying to take this concept to a different level by taking help of high intellectuals from premier business schools. ATC is also studying the mass grassroot level models from Ireland, Norway and Gujarat and trying to implement. The idea is to leverage the strengths of collective interest of chess players to play chess and reward them for playing chess, regardless of winning or losing a game.

On the technology front, ATC introduced online accounting system, robust model for rating. Though we made an attempt to reward the demolisher, we did not take it forward due to technical reasons. ATC has developed its own android app, where player can check his rating, his account online anywhere. You can search for “Chess ATC” in Android PlayStore and download the app. We planned to have a event for launch of this app, but our star players playing the biggest circuit of India’s GM tournaments, moving all over India from Bhopal, Mumbai, Delhi and Chennai. ATC players will soon get access to app in few days.

ATC Co-founders Tarun and Trisha wishes you all a warm and happy chess year ahead. 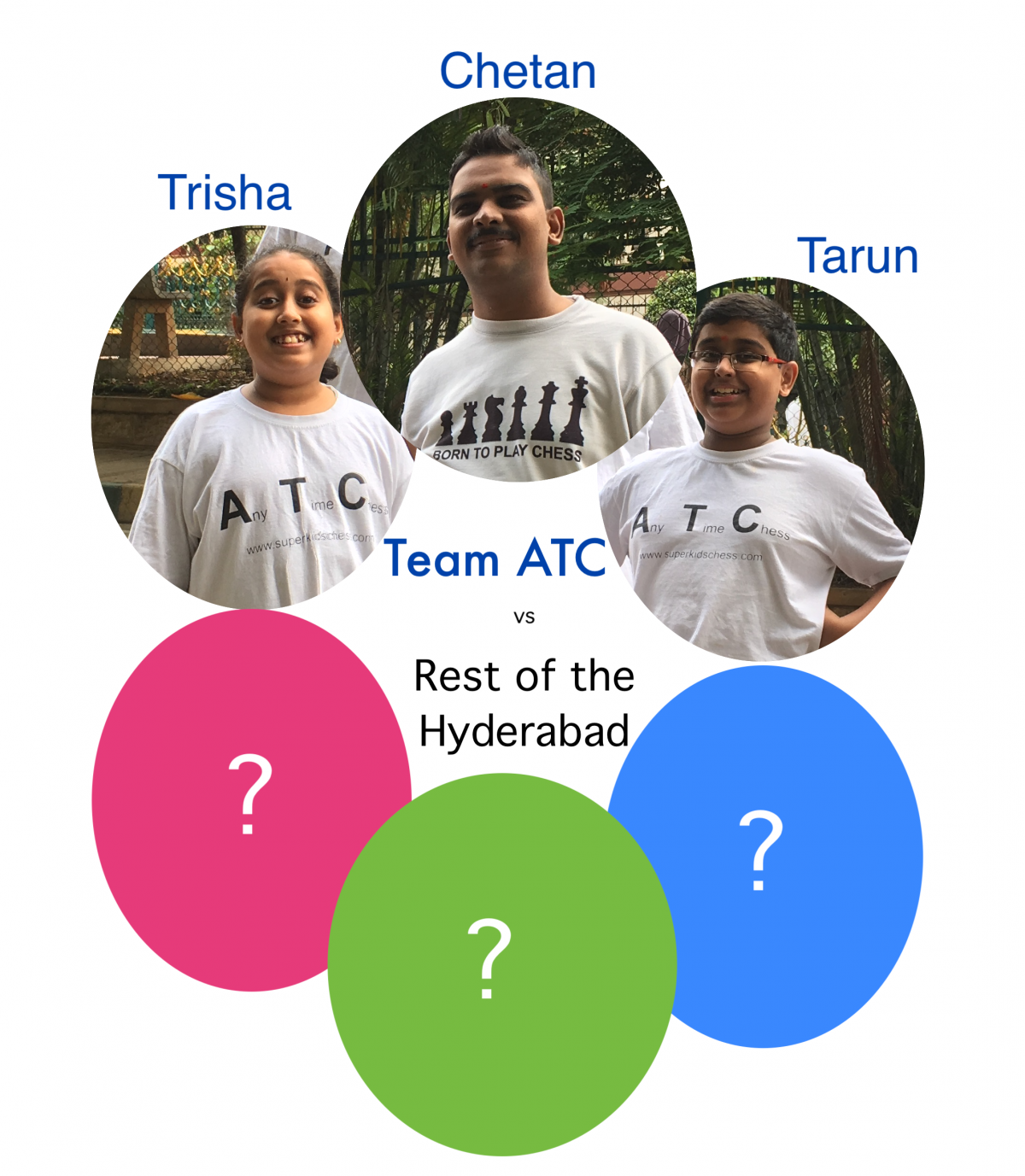 The much awaited team tournament is now going to start at ATC.

Play CHESS with fun, this is one of the main theme for the success of ATC. We the team of ATC introduced many formats which give fun and we keep changing the formats. Our main model of ATC remains same but we introduce different formats in conjunction with our core model.

This time we are introducing team tournaments in conjuction with ATC. The first of its kind will be played from 11th December 2017 till 13th December 2017. There is no entry fee for this tournament. However, regular fee of Rs.10 per match will be applied and you get the rating in our core model of ATC. Prize Fund for this team tournament is Rs. 1000.

In case of tie, Blitz will be played on 4th day, incase if there is further tie, Prize fund will be shared.

Start Time of this Team Tournament will be at 6pm.

Tournament will be conducted on Monday, Tuesday and Wednesday of every week. Only two teams are allowed to participate in a week.

Come and challenge our strong chess players with your team and get a new experience filled with entertainment in our glorious chess field. This will be a unique team tournament that will not only give you practice and fun but it also gives you a good social network in chess.

ATC would like you to take part in our team tournament and get a new experience.

1st Team available to play  team tournament at ATC will be

Do you want to challenge our ATC team? 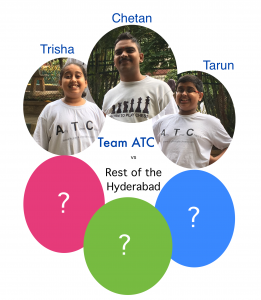 Register below to participate in Team Chess Tournament.